Travis Head doesn’t know if he’ll be released from Australian duties to play in the Big Bash League final.-MelbourneTv

Head is flying from Adelaide to Sydney this morning to rejoin the Australian Twenty20 squad for a game he won’t play — the tri-series opener against New Zealand.

But whether Head is allowed to then fly back to Adelaide tomorrow, just in time for Adelaide’s BBL grand final against Hobart Hurricanes, is uncertain.

“I’m not sure yet,” Head said after leading Adelaide to a one-run BBL semi-final win against the Melbourne Renegades on Friday night.

“It would be nice to play … we will cross that bridge, I guess, tomorrow and work out what is happening.” 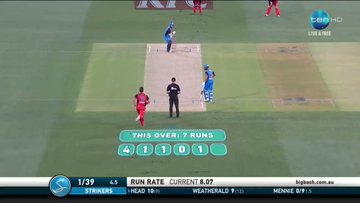 Cricket Australia says it won’t make any decision until after Saturday night’s T20 against the Kiwis.

But whether Head is released to the Strikers could determine the outcome of the BBL decider, Renegades captain Cameron White said.

Head played a match-winning knock — 85 from 57 balls — against White’s Renegades in their semi-final in Adelaide last night.

“I would say if he can’t play, Hobart are clear favourites,” White said last night.

“He comes back and he automatically makes them better. He made 70 (sic) and bowled four overs for six-and-a-bit runs an over,” White said.

Head didn’t even expect to play in the semi-final; he was only released about 24 hours before the game when told he had missed Australian T20 selection.

White believed Head should again be released for the BBL finale, given Australia’s next T20 isn’t until Wednesday.

White himself missed a Renegades derby against Melbourne Stars while he was with the Australian one-day squad, but he missed national selection too.

“I’m not sure if there were different circumstances around that — maybe in my situation they didn’t know what the team was going to be before they released it.

“I don’t know what the policy is or if there is one.”

White supported players such as Head returning to BBL franchises from Australian duties where possible.

“I don’t think anyone in the (BBL) comp has an issue with it,” he said.

And Head also praised the Australian hierarchy for allowing him to return to the Strikers.

“It was very proactive from the selectors and (coach) Darren (Lehmann) to give me the opportunity,” Head said.

“I’m only young still, I’m still trying to learn my craft and there’s nothing better than playing in front of a full house in high-pressure games.

“I was able to be a match-winner which was fantastic.”