Searching for breakthrough success over Australia at home, South Africa will adopt Dale Steyn’s mantra from the previous series between the rivals.-Sabrang

“If you can cut off the head of the snake, the rest of the body tends to fall,” Steyn said a year and a half ago.

Steyn implored teammates to get on top of Steve Smith and David Warner then watch the rest of Australia’s batsmen crumble.

The language and logic rubbed some members of Smith’s side the wrong way, but that was the least of their worries after heavy losses in Perth and Hobart.

Proteas captain Faf du Plessis wasn’t as evocative as Steyn while speaking about the importance of Smith’s wicket on the eve of the four-Test series that starts in Durban at 7pm AEDT on Thursday.

However, the message was much the same.

“Similar to what I said about the Indian team (last month), they’ve got one or two stand-out, star batsmen,” du Plessis said.

“If you can put pressure on them and keep them quiet, that generally reflects how your series will go.

“He (Smith) is obviously a very big player for them.

Smith averaged 42.4 in that series, scoring 48 not out in a total of just 85 at Bellerive.

It is one of only two series in which Smith has led Australia and failed to register at least one century.

Australia’s captain, who shared a dressing room with du Plessis during the 2016 Indian Premier League season, has since taken his game to another level.

“Hopefully there’s a bit of (past) experience I can take into the game,” du Plessis said.

South Africa are hunting their first home Test series win over Australia since 1970.

“What we did really when we were there was keep them quiet. When they’re scoring freely they can really get on top of you as a bowling attack.” 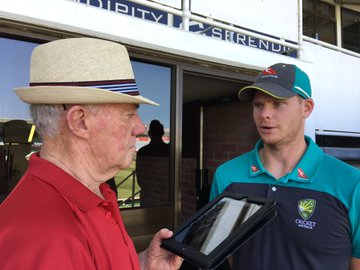 Du Plessis opted against naming his team ahead of the toss, admitting the Proteas were unsure whether they should include four pacemen or beef up their batting order.

Left-arm spinner Keshav Maharaj is expected to return at the expense of Andile Phehlukwayo, however the final spot in South Africa’s XI remains up for grabs.

Young paceman Lungi Ngidi had impressed last month on Test debut, snaring 6-39 against India, but he might be squeezed out of the team in favour of Theunis de Bruyn.

De Bruyn is a batsman with a first-class bowling average of 36.45, having snared 11 wickets from 49 games with his medium-pacers.

“Temba Bavuma hasn’t recovered fully from his hand injury – that’s the one thing I can tell you. Then we’re still pondering whether we’re going to play seven batsmen or six and four seamers,” du Plessis told reporters.

Du Plessis hasn’t played since breaking his finger earlier this month during a ODI against India, but is being rushed back because of his importance to the side.

“I’ve played with finger injuries before. I think the biggest battle you have to get over is the mental side of things,” he said.

“To be mentally prepared for the battle — and I am ready.

“I’ve had three good nets over the last three days, just to hit a lot of balls.”

The Ashes: At the end of a long series, cricket descends into fever dreams